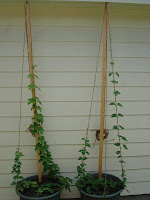 One of the Nugget bines reached the top of the hop twine this weekend with the other bine on that same twine about a foot behind it. Thanks to the handy trellis design from BYO Editor Chris Colby, providing more growth space was easy. I simply untied the twine, fed out about a foot and a half through the eye bolt on top of the pole and the twine and bines on it simply just drooped down beside the pot. I then added another eye bolt to the side of the pole and loosely tied the twine to it so the bines wouldn't get damaged by flapping around in the wind. However, I have a couple of ideas for hanging the loops of twine that would be better then just letting it hang down and eventually lay on the ground. 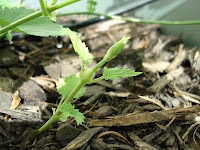 The Cascade is also continuing to do well and a new main bine has sprout up from the root. This adds to the already dozen or so side shoots that are growing off the main original bines. I had to add a third hop twine to the pot and one of the new bines is already starting to wind its way up. 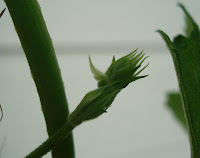 Some of the side arms are really starting to develop and are actually beginning to resemble tiny little hop flowers.

I drilled some holes in the sides of the pots to test for soil moisture and the soil in the lower half of the pot seems to be pretty wet. I decided to turn off the irrigation system for a day or two and see if the soil dries out as I don't want to lose the plant due to root rot.
Posted by Steve at 7:00 PM