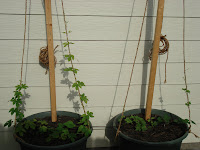 There's been significant growth since the last post two weeks ago. The Nugget now has a third bine climbing the twine. All three Cascade bines are now long enough to start climbing as well. A fourth shoot appears to be growing out of one the existing bines about two inches above the soil. The Cascade bines are significantly thinner then the Nugget and look almost delicate.

The daytime high has now started reaching into the low 90's and the humidity is climbing. Both pots have been on the South side of the house which receives full direct sun from dawn to dusk. I think the afternoon sun and heat will be too much as the summer approaches, so both pots were moved around the corner to the East side of the house. They now receive full sun until around 1:00pm when they fall into the shade of the house. This should provide adequate sunlight and protect the plants from the hottest direct rays.

Some of the lower leaves are yellowing with rust coloured spots. I'm not sure if that's damage from the heat, rain or lack of nutrients. Whatever the potential cause, I went ahead and fertilized both plants with some Miracle Grow fertilizer. Its about two months since they were planted, so the nutrients included in the potting soil may have been used up by the plants or watered out of the soil.
Posted by Steve at 10:00 AM