A loss, but not necessarily a bad one 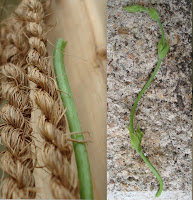 I mild tragedy struck the Cascade plant this morning. The longest bine had grown up past the top of the twine again and while lowering the hop twine to allow more growth, I accidentally broke the tip off. D'oh!!! Unfortunately, a hop bine will not continue to grow once the tip is damaged, so it's as long as its going to get (it reached about 11 feet). Although, it certainly could grow a side shoot near the top which would then carry on up the twin. It will also still grow side arms which will hopefully develop into hops. Fortunately, there are plenty more bines and this will probably help them to really take off since the plant won't be putting a lot of its energy into growing that main one anymore.

After the tragic event with the Cascade, I was a lot more careful while lowering the twine for the Nugget bine which had also reached the top. That's another 18 inches of growth for both plants since Saturday. I also added a third twine to the Nugget pot to accommodate the new growth.

Up until now, both plants have really only had one main bine that was doing the majority of fast climbing up the twine with the other bines growing much slower. The Nugget also hasn't had nearly as many side shoots develop as the Cascade. However, over the past few days, the other bines on both plants appear to be in a growth spurt and the Nugget has started developing quite a few side shoots off the main bines near the bottom.
Posted by Steve at 8:00 AM