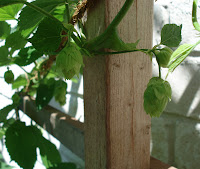 We have had beautiful weather in Houston over the past few weeks, weather that the hop plants obviously love. They have both experienced incredible growth rates and the Cascasde developed hop cones over the weekend! I didn't get first hop cones until we were into June last year. The cones (in the photo to the left) are on the middle of the main bine which is already over 15 feet long. More side shoots are starting to develop over the length of the bine as well as on a couple of the other ones. 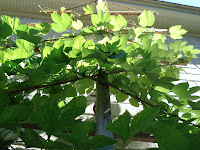 The photo to the right was taken from top of the pot looking up the pole of the trellis. From underneath, you can really see how the bines have wrapped around the twine and each other as they've grown. 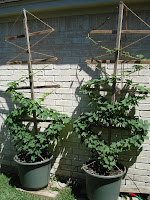 I've done a lot of reading about growing hops and frequently browse a couple of online hop growing forums. Some of the posts I've read suggest that all growth up to now should be cut down to the ground to make the plant start over again. The reasoning behind this seems to be that hops that develop early in the season will have a "grassy" flavour to them, possibly caused by the heat. Making the plants start over will ensure the hops develop later in the season. However, that seems to be more of an opinion with was just as many that disagreed with it. So, since this is only my second year growing them and I only have two plants, I'm going to just let them grow and harvest the cones as they become available. Eventually, I'd like to have few more hop plants and then I can actually experiment with them and get a better idea of what works and what doesn't for growing hops down here in Texas.

I've continued to monitor the wetness of the soil and adjusted the watering schedule accordingly. I like the soil to get fairly dry between waterings, but not enough to make the plant wilt. I also fertilized both plants with some liquid Miracle Grow fertilizer.
Posted by Steve at 12:53 PM