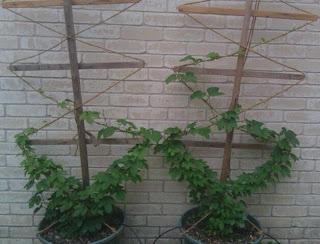 Thinned out some of the new growth around the base of the plant and removed a few new bines. I probably still have too many bines per plant, but both are continuing to do very well and look healthy and bushy. A bine from the Cascade (right) is now almost at the third bend in the twine. Even though the twine is on an upward angle, some of the bines still try to just grow straight up and I often have to spend a few minutes a day wrapping the new growth around the twine.

The temperatures have been in the high 70's during the day with plenty of sunshine which the plants obviously like. They're currently getting watered every second day to allow the soil to dry out which will get adjusted as the daytime temperatures increase.
Posted by Steve at 9:41 AM